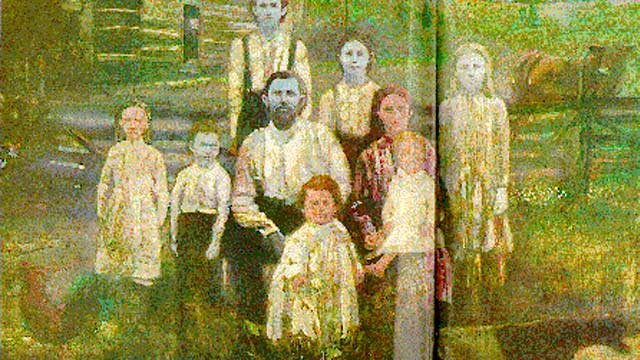 Above you see a photo where some people, members of the Fugate Family of Kentucky, have a bluish tinted skin. For years there was a mystery about blue skinned people; was it a hoax or did they really exist? Some believed they existed, but did something to make themselves blue. Some felt it was a kind of disease. In that, they were closer to being right. I have the real story for you on this page about what scientists have discovered about blue skinned people. Yes, they really do exist.

The Story Begins Near Hazard, Kentucky.

In 1800, a French orphan named Martin Fugate settled down in a community near Hazard, Kentucky with his new, pale skinned bride Elizabeth Smith Fugate. Unknown to the couple, both carried a recessive gene known as methemoglobinemia (met-H.) This tongue tangler of a name, belonged to a recessive gene that had the odd ability to turn skin a pale blue. It’s a blood disorder in which an abnormal amount of methemoglobin — a form of hemoglobin, which distributes oxygen to the body — is produced, according to the National Institutes for Health. This creates a lack of iron in the blood, giving the person who has the disorder a blue tint to their skin.

The area in which the Fugates lived was rather isolated from other communities, and as a result, there was much intermarriage within their own gene pool. Geneticists have long known intermarriage is not a good thing, since weak, recessive genes are made stronger with the birth of each person who carries the gene and marries someone else with the same gene. With each successive birth, the children of such a union often result in mental or physical disabilities, or as in the case of the blue skinned people, the shade of their skin deepened with every generation. Since they all lived in and around the same area into the 20th century, their habit of intermarriage continued just as it always had. This resulted in fewer light skinned people and more blue skinned people.

In Time, A Treatment Was Found

The extended family came under the scrutiny of a nurse, Ruth Pendergass and a hemotologist, Dr. Madison Cawein III. Together they researched the background of the family members, and found a way to help them cast off their blue coloring. They were treated with supplemental oxygen and a compound called Methylin Blue. Methylin Blue restores the iron in hemoglobin to its normal, oxygen carrying state.

But Wait! There’s More To The Story.

There’s another cause of skin becoming blue, a condition known as ARGYRIA: resulting from chronic intake of silver. There are two different types: Localized Argyria, which is topical and affects only the part of the body where silver and silver dust continually come in contact over a long period of time, and Generalized Argyria, which results from chronically swallowing or inhaling silver compounds, either for medical purposes, or as a result of working with silver or silver compounds. Silver can damage eyes by depositing in the lens of the eye, though it has no effect on the eye conjunctiva.

Have You Ever Seen A Blue Skinned Person?

As travel has become easier over the years, and communities traveled to other areas, there’s less intermarriage, and the prevalence of the recessive gene that causes the disease has waned, resulting in fewer blue skinned people.

Below are medical and science textbooks about the condition of methemoglobinemia in case you want to know more.